The Valley of La Sakana and the Sierra de Aralar are located in the geographical area commonly known as the Montes Vascos. These are situated outside of what we topographically call the Pyrenees, but geographically they are clearly the continuity of the same geological structure in its way towards what more to the west will denominate Cantabrian Mountain range.

We are facing a peculiar geography that a priori and as far as road cycling is concerned it would seem to have nothing special if we try to differentiate it from other places, but it is not so, for a sum of different reasons here we have a PUNTO BIKE in its own right. On the one hand the valley - oriented cleanly from west to east - is crossed by a highway that absorbs all the traffic, leaving to cyclists an almost exclusive use of the old road that runs more or less parallel to that highway. On the other hand, the fact that the valley is situated between the Sierras of Aizkorri and Aralar in the North and those of Andia, Urbasa and Entzia in the South has generated a network of roads that - with their respective Mountain passes- ascend such Sierras in their way to the neighboring regions causing an endless number of possibilities when it comes to creating cycle routes.
Thus, towards the North we find the Ports of Otzaurte, Lizarrusti, San Miguel de Aralar and Zuazarrate. If we look to the South, the ports are: Opakua, Urbasa, Lizarraga, Arteta and Ultzurrun. We do not forget also the borders of the valley that in the West communicate with the Llanada Alavesa and to the East with the region of the Ultzama and Leizaldea. An arsenal of luxury when it comes to preparing tours.

In addition, to the said above we must add that the territory that we find when we move in different directions from La Sakana is of an environmental and cultural variety much greater than the distance kilometers could make us think. This variety can be appreciated by taking a look at the Commented Photos tab at the bottom of this page.
Read more... - less - 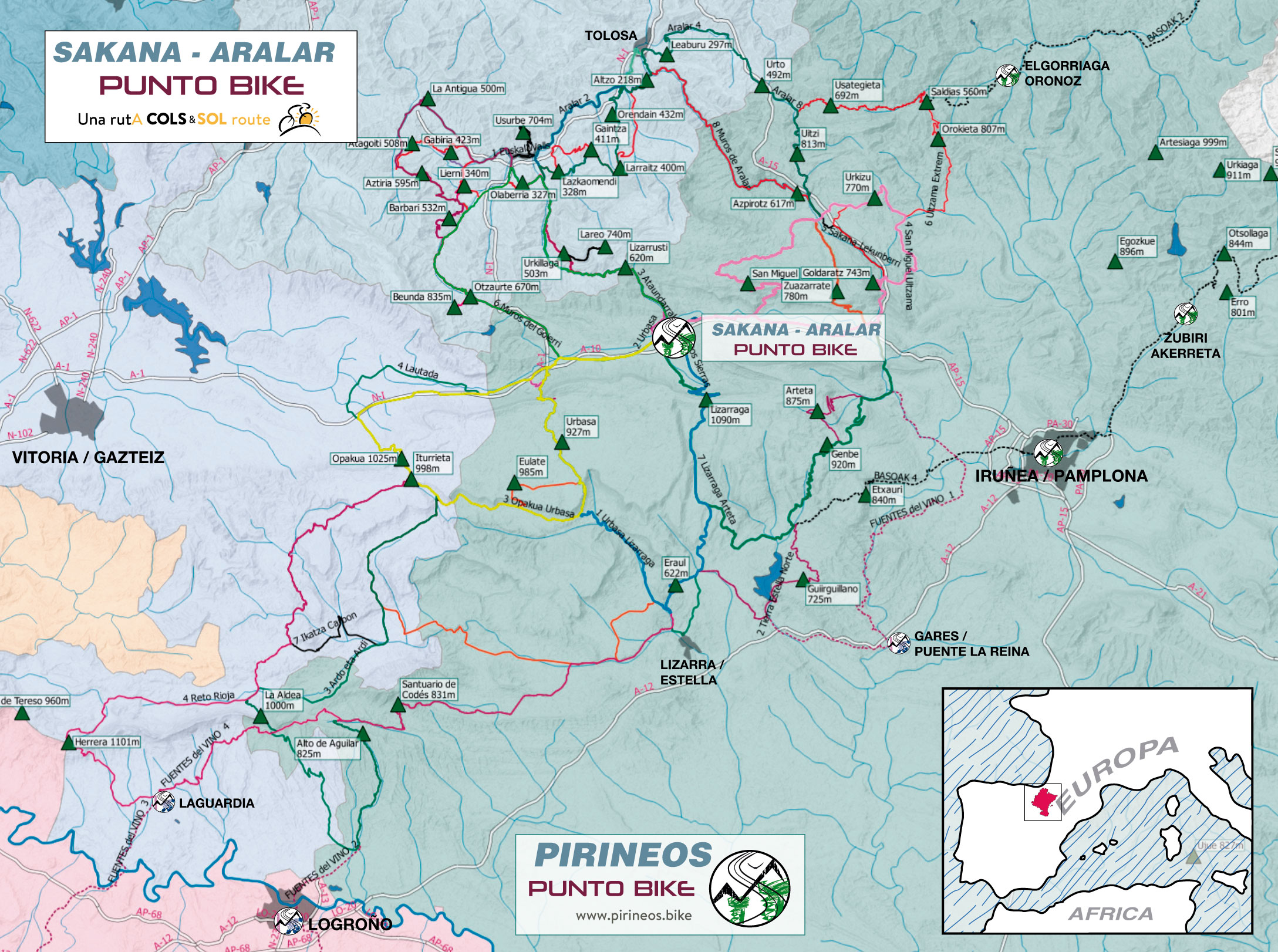 For zoom in or

Proposals for sports bicycle touring on asphalt with point of departure and arrival in Sakana Valley and Lizarrusti Parketxea.

The two points are very close together so that all routes presented below may begin at any of the 2 points.
We have chosen Arbizu as a starting point for being centered in the Sakana Valley. If we stay anywhere else in the valley, the distances between the villages are not great and we can easily adjust the stage.

Although a priori seems excessive, the 8 options of tour back to Aralar that we have proposed have their sense. The first 4 start heading towards the South, towards Navarra. The latest 4 are in the opposite direction, they begin northward entering Gipuzkoa. Thus, ports that in one case are up, on the others are lower, which can make the route very different.

The blues are the shortest possible options. The reds, include either San Miguel de Aralar or some of the "devils" of the Goierri from Gipuzkoa. And the purples, the +, take all the walls they can and also widen beyond the usual limits of the Aralar mountain Range, deepening into the area of Leitza.

BASOAK, Aralar - Irati and FUENTES del VINO, Aralar - Urbión, are 2 routes initially set to take over 3, 4 or 5 days each.
Both have two posible common starting points located in Arbizu -Sakana Valley- or in the ancient city of Pamplona. FUENTES del VINO can be started as well in the city of Laguardia in LA RIOJA Alavesa.

On each routes web pages you will find all you need to organize the journey: GPS tracks, maps, guide rail, roadmaps and links to all services you may need if you want to do it on your own.
www.basoak.bike - www.fuentesdelvino.bike
If you prefer to hire a lodging service with baggage transport or accompanying in route, this is one of the links where you can do it. Proposals PIRINEOS PUNTO BIKE

BASOAK is strongly directed to the East, cycling for two days by the Basque Pyrenees to the Irati forest, one of the largest woods in Europe. The route returns to Aralar in another 2 days, by the southern slopes of the Pyrenees first and crossing the Pamplona and Sierra de Andia later.

FUENTES del VINO is also strongly directed but this time to the South, through Navarra’s lands first and La Rioja later, until reaching the Urbión clump in the province of Soria. The return is again through the vineyards of La Rioja and the lonely roads of the Montaña Alavesa.

Both routes maintain the same philosophy: do "sport bicycle touring" but trying that at the end of the day there is still enough energy for something else besides resting until dinner. This is done to allow us at the end to have enough time to be able to learn - even slightly - where we are. Be it by getting into a pool, strolling through a forest, wandering through a village, or reading a book.
It is true that some stage of FUENTES del VINO, even without excessive climbing, takes time. But there is nothing which can’t be fixed by waking up a little bit earlier...

Beginning in the Sakana Valley, these are the options we can choose: 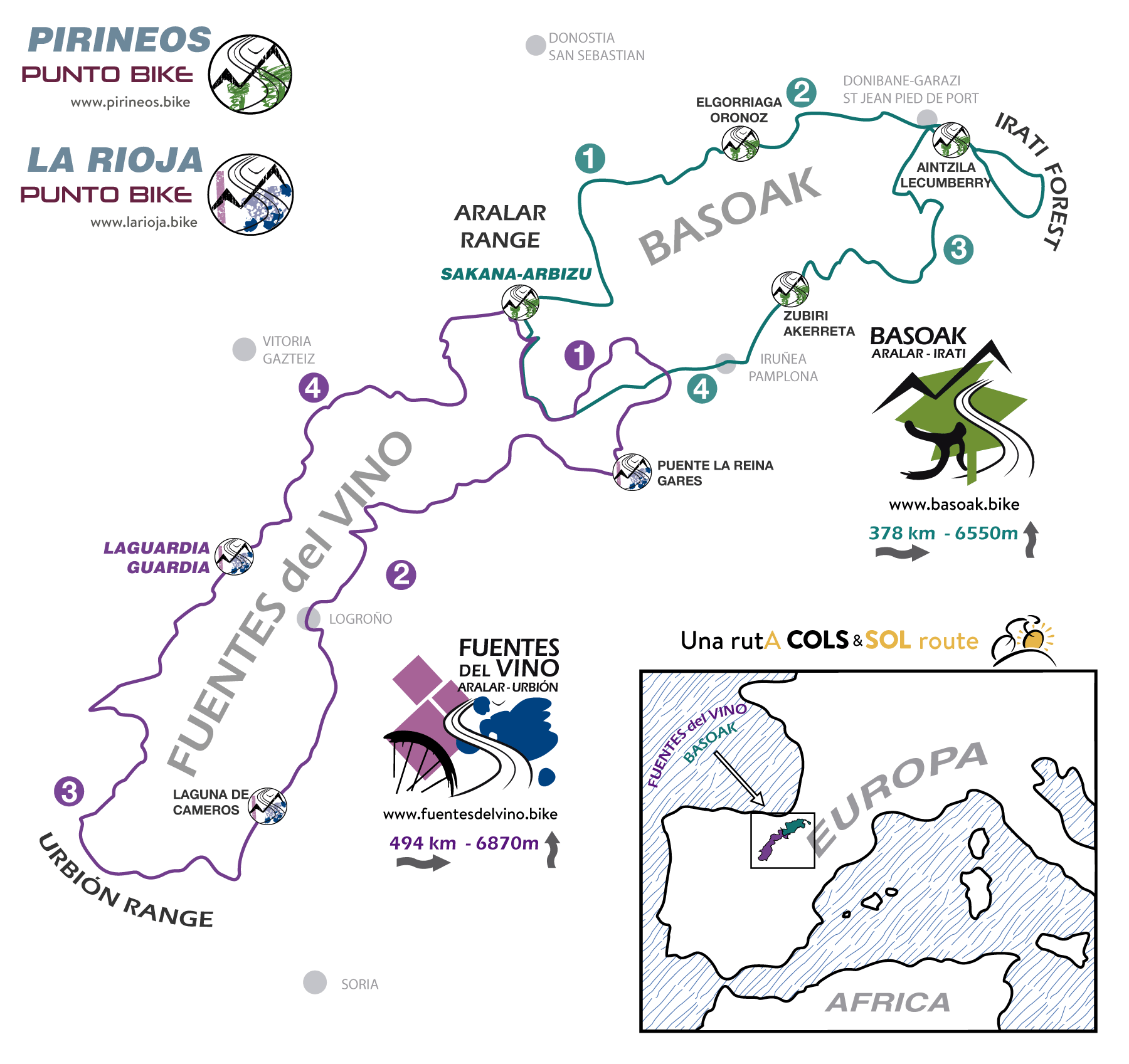 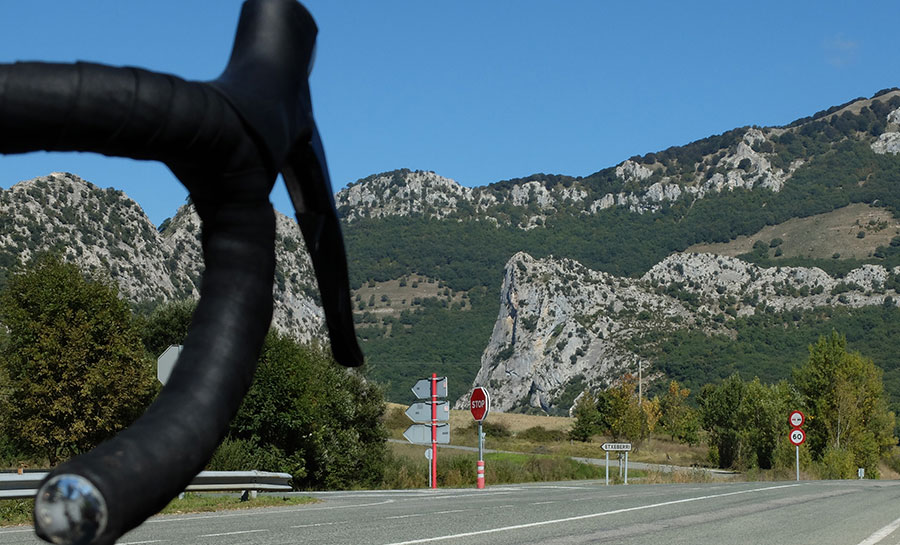 In the northwest end of Navarra, halfway between The Middle Zone and Navarra North is the Sakana Valley. The PUNTO BIKE is encased between the Sierras de Aralar and Aizkorri in the North, and Andia, Urbasa and Entzia in the South.
In the images, road with wide and smooth curves in Urbasa (photo 1), a rock formation known as Las Dos hermanas, at the eastern end of the valley (photo 2) and view of the valley in the direction of Pamplona (photo 3). 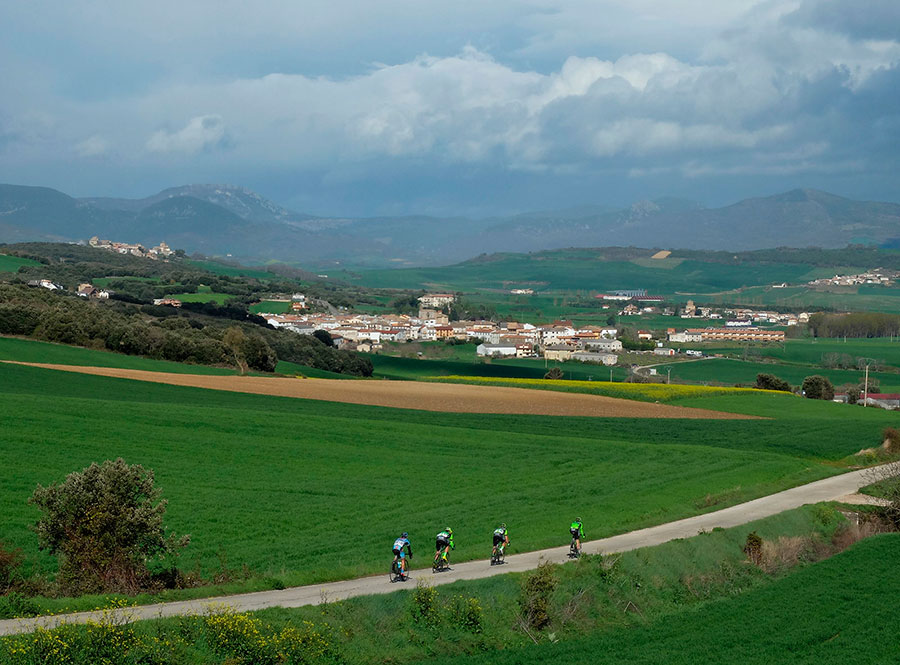 Tierra Estella is among many other things, traditional cycling land, in this sense, one of its greatest exponents is the professional race "Grand Prix Indurain" held annually on its roads.
Its location, in the South of the Sakana Valley, makes it very frequent to travel on its roads. To reach Tierra Estella we will always have to climb some of the Mountain passes that protect it; - Lizarraga, Urbasa, Opakua, Arteta, Ultzurrun -
In the images, spring rainbow in the environs of Aritzala and broken race in the descent of the Col of Eraul towards Abartzuza during the edition of Grand Prix Indurain 2017. In front Simon Yates raced towards the goal in the Puy of Estella. 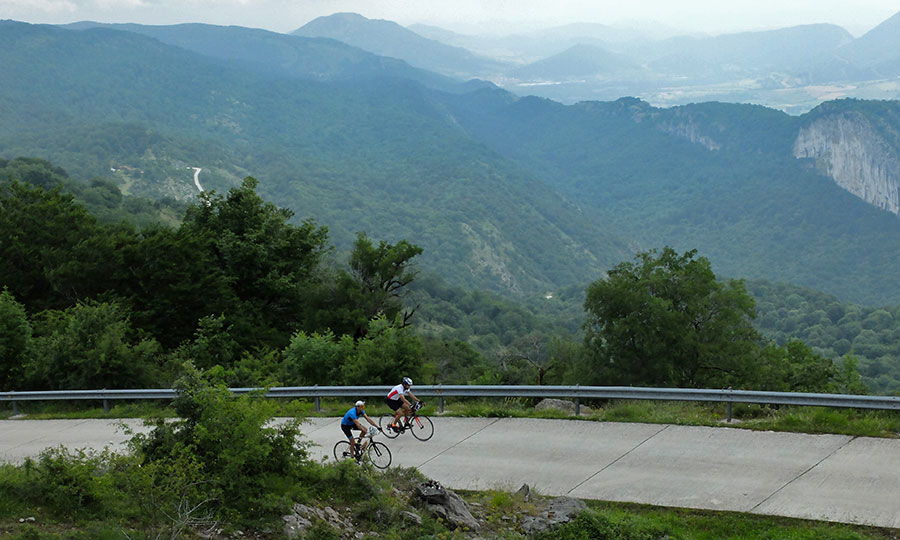 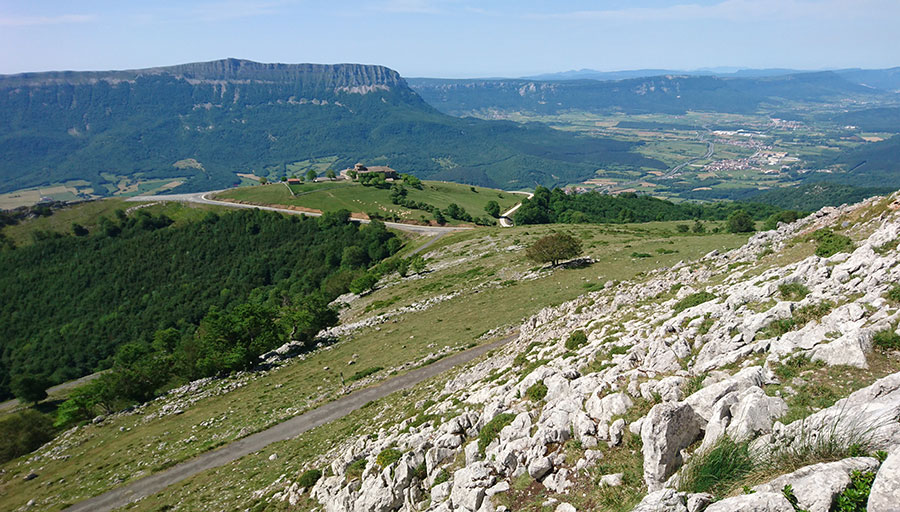 In the North of the Sakana Valley, in the Sierra de Aralar, the Artxueta mountain and the San Miguel, Sanctuary , stand as the representatives of difficult cycling in the area. If we want hard route we include the ascent from Uharte Arakil, if we want to smooth we climb from Lekunberri. 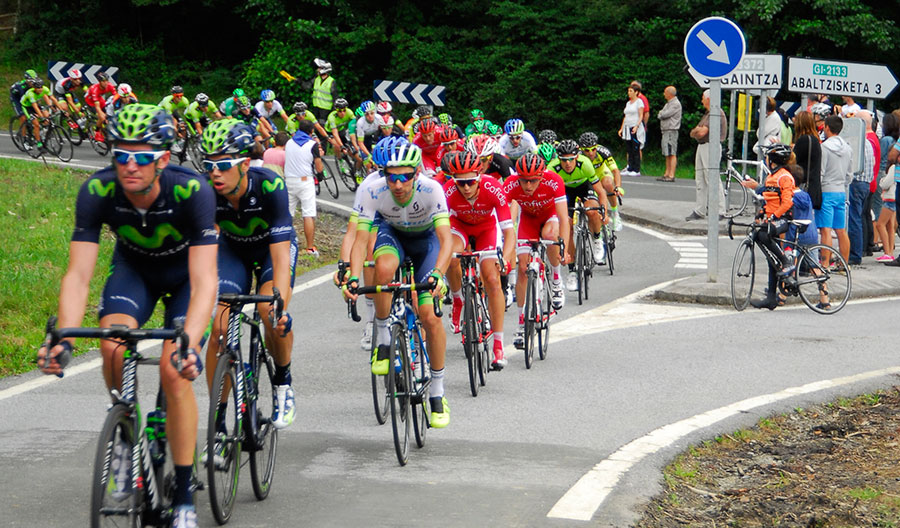 The Sierra de Aralar is shared between Gipuzkoa and Navarra. The massif has dimensions that allow to carry out routes of a certain extent by its perimeter. It is not excessive but considerable, since we speak of a minimum that exceeds slightly the 100 kilometers.
It is what we call the Aralar Tour a route with many options and a very different environment depending on the slope that we are traveling. In the south - Navarra - uniform and predictable roads and landscape, in the north - on the Gipuzkoa slope - an infinite number of small roads, constant ups and downs between farmhouses and small mountain villages, intense Lizarrusti forest on the western slope, and Gipuzkoa Industrial present but without high interference on route.
We are talking about routes with classic scents which run precisely for a territory in which they abound and that is "seat" of one of the greatest fan group in the world, the Basque fans, that is always present in the ditches of all the great cycling races. 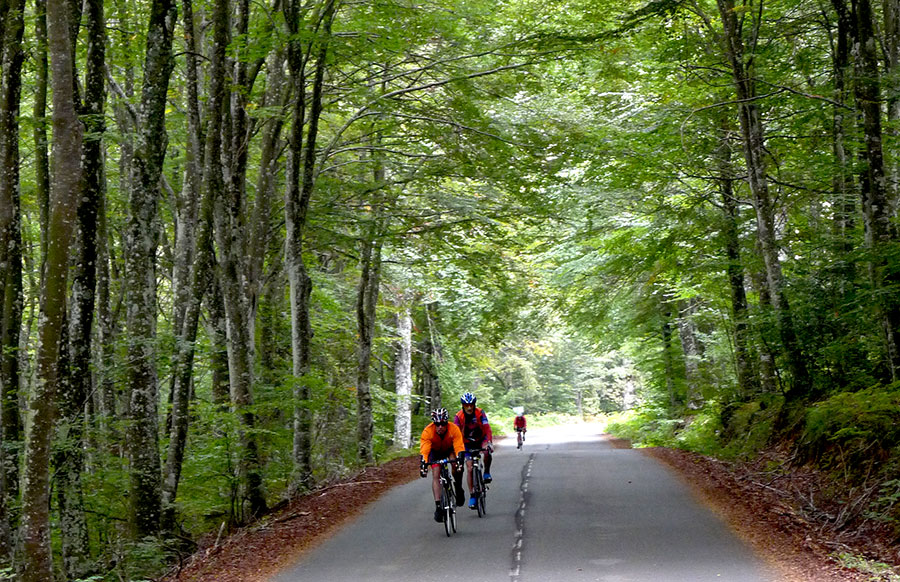 At its westernmost point NAVARRE touchs with Alava in the "Cuadrilla" - region - of the Montaña Alavesa. With regard to cycling, we can define it as a group of small villages overflowing with authenticity with intercalated natural spaces that follow each other regularly and wide enough to allow any type of itinerary.
In the pictures; Daily environment in any of the routes of the area, pedaling between the beechs (photo 1), and La Muela de San Román (photo 2) on the village of the same name, forests and crops in equal parts. 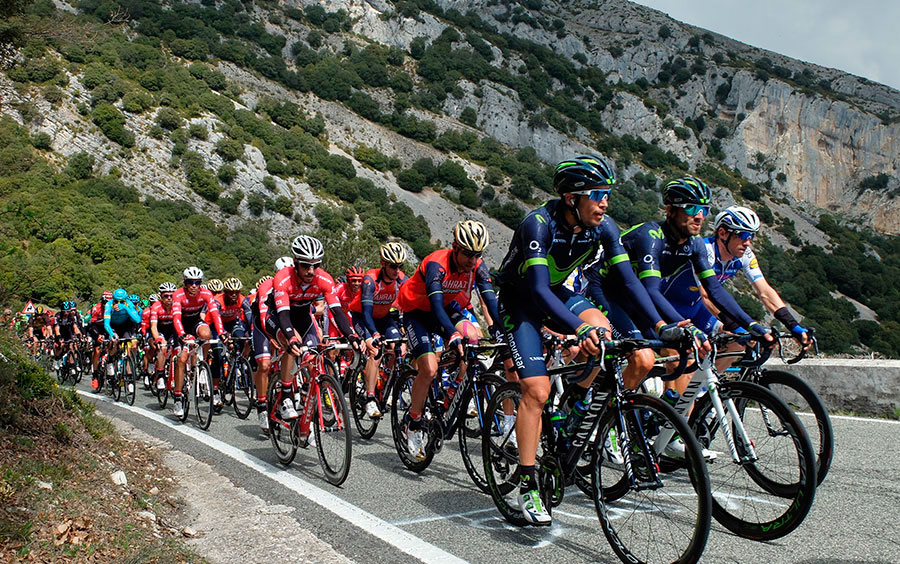 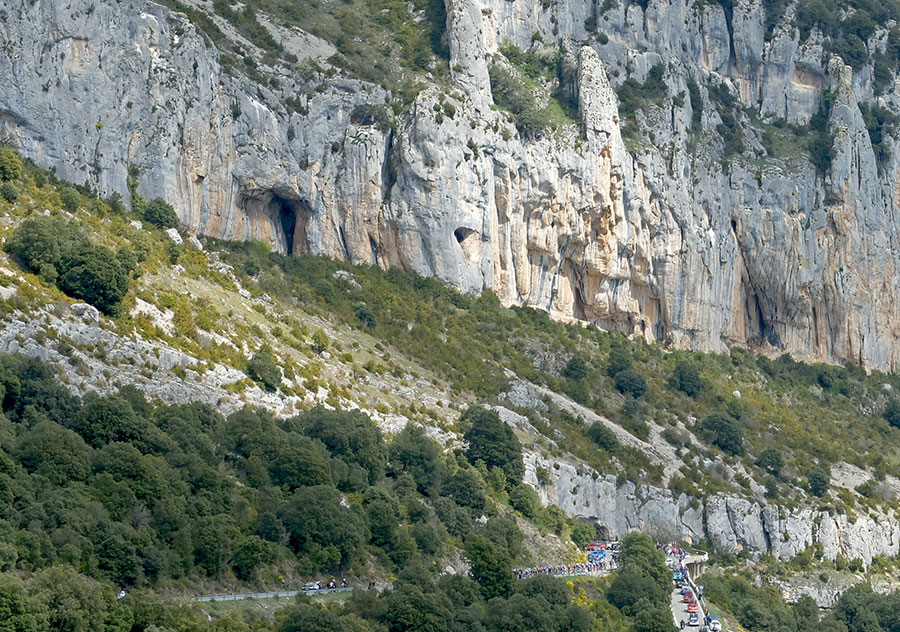 The port of Etxauri is the prototype Col that we can find in this area of Navarra. 6,8 km of route, 430 meters of unevenness, sun and shade in equal parts and excellent viewpoints of a good part of NAVARRA and the neighboring Communities.
The fact that it is located directly above the Pamplona Basin, and the spectacular surroundings with the road under the walls of the climbing school, makes it included in routes that usually return to La Sakana crossing the Sierra Andia trough the Lizarraga Mountain Pass.
In the photographs the peloton of the Euskal Itzulia 2017 ascends under the cliffs of the port. In the foreground Movistar, with the final winner of that edition of the event - Alejandro Valverde - in the front, approaches the top well guarded by the Trek-Segafredo of Alberto Contador. 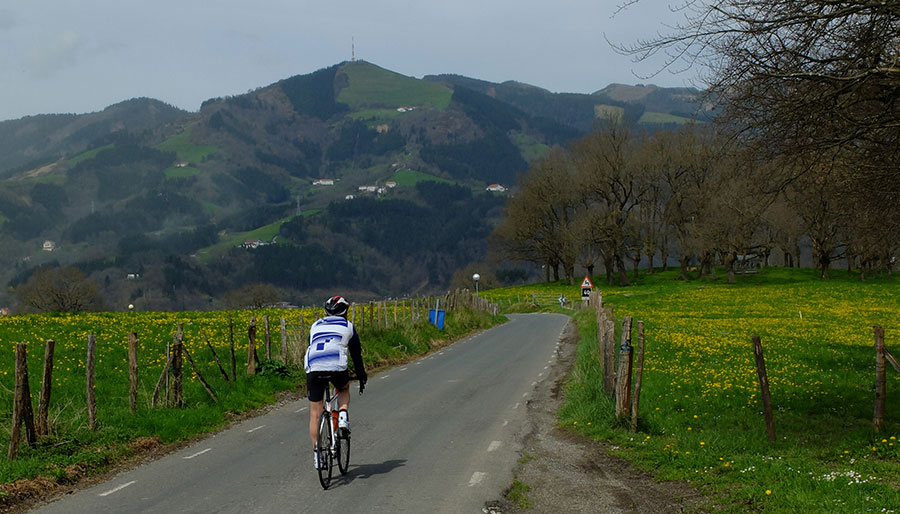 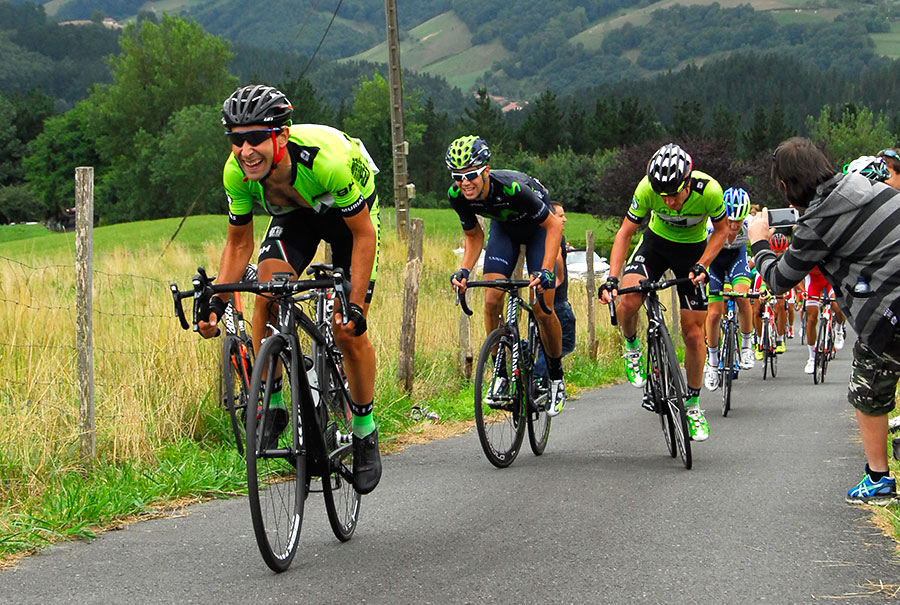 Although it is not usual, some times what we want cyclists is to face us as hard as we put ahead. For these cases we keep the Diablillos Vascos.
In the second photograph we have one of the TOPs TEN of the area, the fearsome "Gaintza Wall" - 1,6 kilometers at 15,3% - where Alberto Contador sentenced his Vuelta to the Basque Country 2014. In the first photograph we descend Lazkaomendi with the view set in the ascent to Usurbe, - the mount with the antenna in the top - the absolute TOP TEN of the zone and whose hardness we accustom to simplify simply saying that its wall comes to be like "Half of the ANGLIRU". 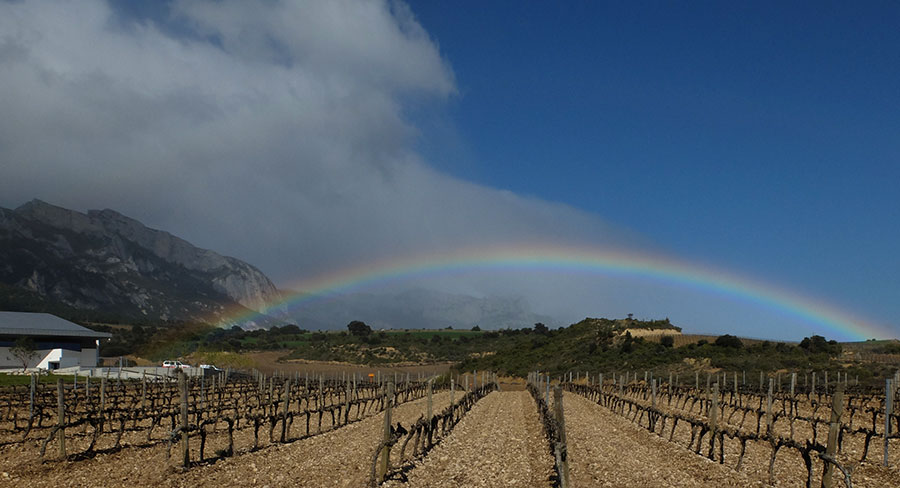 The relative proximity of the wine region of La Rioja produces an irresistible attraction for rolling between vineyards. It is not close, so what comes up is the challenges of the routes Reto Rioja and Ardo eta Ardi (Sheep and Wine).
In the first image the new facilities of Bodegas Rothschild Vega-Sicilia under the Sierra de Cantabría in the Alava village of Samaniego. On these lines pedaling between the vineyards of the Marqués de Riscal winery in Elciego, behind the charismatic building designed by Frank Gehry. 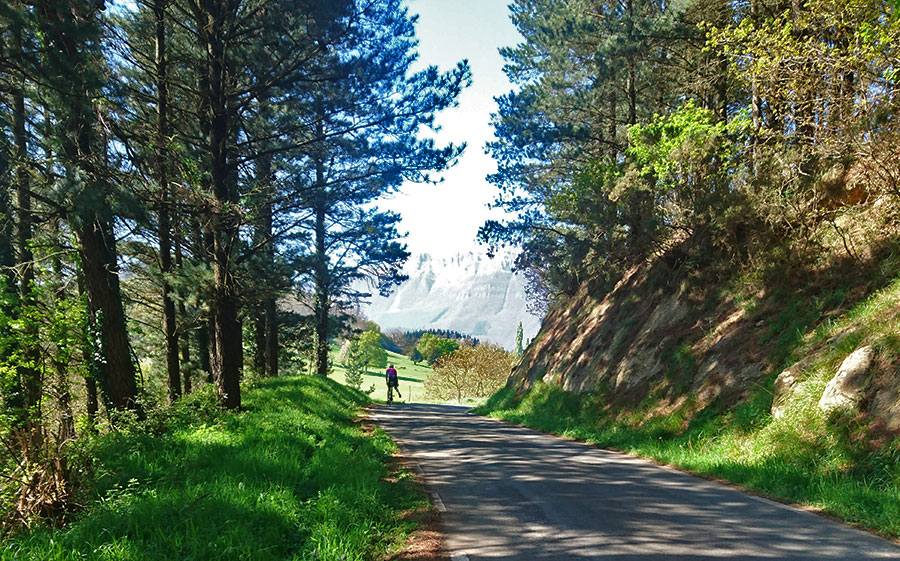 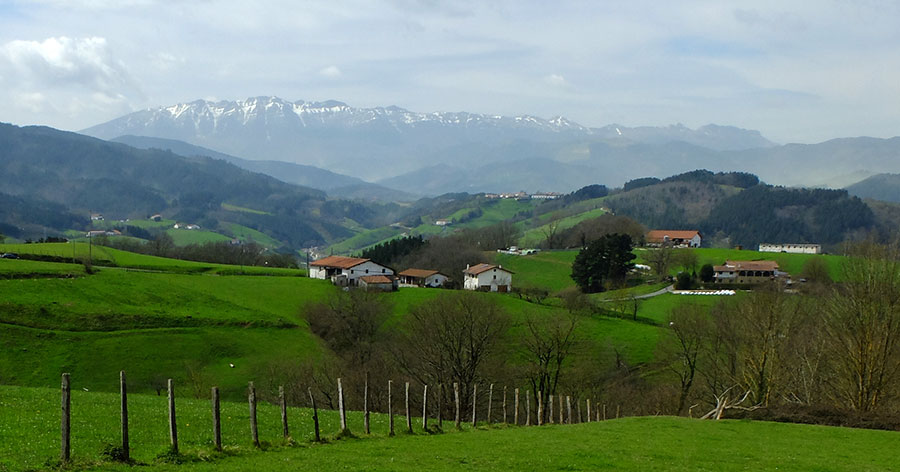 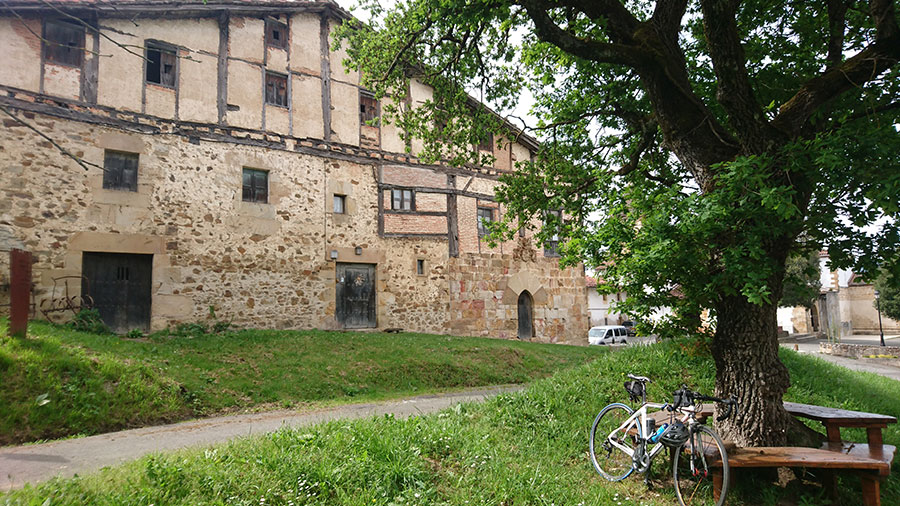 Another option to take into account when we are in the Sakana is to roll north, towards Gipuzkoa towards what the industrialists of the district have agreed to promote internationally like Goierri Valley.
The routes are developed along the low slopes of the Aizkorri and Aralar ranges and by a mixed agricultural / industrial territory with a strong imprint of mining past.
The routes are always alive and changing; A stretch of forest, a small port between hamlets, a ratonero descent, we circled a locality of a certain entity ... and again up by another ramp. Aroma and flavor of classic, Tour to the Basque Country, which is quite logical being as we are in the heart of the core ... it is rare the year that the Basque round does not go down these roads.
We could think that traffic can be a problem in this geography, but the reality is that the highways absorb the circulation.
In the images, stop at the Alto de Barbari between Segura and Zegama (photo 1), typical landscape of the agricultural Gipuzkoa - with the Aizkorri mountain range on the horizon - (photo 2) and Medieval farmhouse in Zerain (photo 3).